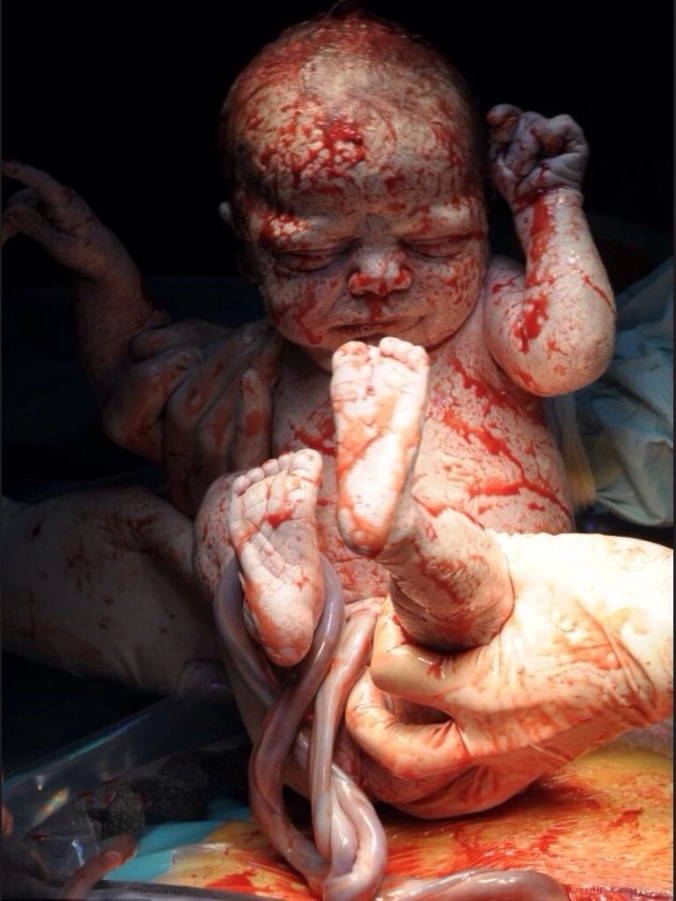 The question of whether to pay for storage of a baby’s cord blood is now routinely asked of expectant parents in obstetrician offices and hospital delivery rooms. Many states have passed laws requiring that doctors tell expectant parents their options for cord blood: discard it; bank it privately; or donate it to a public bank, which like a blood or organ bank helps people in need. The harvesting and storage of stem cells from the blood of umbilical cords has surged in the past decade to a $4 billion global industry.

But a Wall Street Journal analysis of government inspections and a review of lawsuits in the U.S. found problems in the loosely regulated cord-blood-banking business, including dirty storage conditions, leaky blood samples and firms going out of business.

Some private cord-blood banks are essentially marketing websites that lure customers, collect fees, then outsource the processing and storage of what is touted as biological life insurance for children.

The pitch for private storage is compelling to expectant parents. A child’s stem cells—a kind of genetic building block that may repair damaged blood, tissue or organs—are less likely to be rejected by the body than someone else’s cells. Researchers say chances are slim for finding a perfect match at public banks, which last year stored a total of 193,418 samples nationwide.

Stem cells from cord blood were first successfully transplanted into a 5-year-old boy, Matthew Farrow, to treat a rare blood disorder in 1988. He received his sister’s umbilical-cord blood cells, and his condition improved.

There have since been more than 30,000 cord-blood transplants world-wide to treat more than 70 diseases, according to estimates from Be The Match, a Minneapolis nonprofit bone marrow registry. Research is under way to see if stem cells can be used to treat brain injuries and some types of diabetes, the nonprofit said. Most of the transplants have been between donors and unrelated patients, using matching cord blood from public facilities, said Dr. Pablo Rubinstein, director of Howard P. Milstein National Cord Blood Program, a public cord bank, at New York Blood Center, and the longtime survival rate is about 50%.

Most U.S. medical authorities support giving to public banks because the donated cord blood has a much higher likelihood of helping someone who is a close match, compared with the chances of children needing their own.

Private banks say they offer parents the security of holding on to their child’s cord blood in the rare instance it is needed—by some estimates, 1 in 2,700. The roughly three dozen private banks in the U.S. that store and freeze a newborn’s cord blood usually charge $2,000 or so up front, often with annual payments of about $125.

The number of cord-blood samples they store has quadrupled since 2004 to 1.7 million, a number expected to keep growing, according to BioInformant Worldwide LLC, a research firm. Last year, there were 1,102 cord-blood transfusions from public banks in the U.S., according to the Department of Health and Human Services. There are no similar figures for private banks.

While acknowledging that stem-cell science is still in its early stages, private cord-bank operators say it holds the potential to transform medicine.

Cord-blood handling is a delicate process. After doctors collect the blood—three ounces is average, they say—it is shipped in insulated containers to arrive within 48 hours at a lab where workers separate the stem cells.

The blood is placed into sterile bags or vials and stored at about minus 320 degrees Fahrenheit, frozen in the vapors of liquid nitrogen. If accidentally thawed, the blood can’t be refrozen without spoiling the sample, researchers say, raising the stakes on proper storage.

Duke University’s Joanne Kurtzberg, a leading cord-blood researcher and clinician, said in the past few years she has rejected several hundred samples of cord blood from the estimated 2,000 she has received from private banks to use in clinical studies. Some of the samples weren’t sterile or hadn’t been tested for contaminants or diseases, she said; others didn’t have enough cells to be useful.

The Food and Drug Administration each year inspects roughly a fifth of the approximately 2,700 facilities in the U.S. that store blood, sperm and other human tissue. The FDA’s monitoring of private cord-blood banks is focused on preventing the spread of infectious diseases, rather than making sure the banks can deliver on what they promise.

The government requires public banks to license the cord blood, which entails copious documentation on processing, storage and sterility—and a site inspection before opening. By contrast, the FDA requires private banks only to register their company name and address, and say what they intend to do with the blood.

“We don’t have a particular goal or statutory requirement” for private banks, said Mary Malarkey, director of the FDA’s office of compliance and biologics quality, who noted the companies are expected to follow rules for safely handling the cord blood.

The agency carries out surprise inspections on public and private banks, but it is difficult for consumers to see those results. The FDA’s online database offers scant details about its inspection findings. They also can be confusing. Some entries, for example, are listed under a company’s corporate owner rather than the name of the bank. Detailed information can be obtained only through an open-records request, the FDA said.

Ms. Malarkey, of the FDA, said the government in 2009 had found problems in the industry, but it has since improved. At the time, Ms. Malarkey voiced concerns about the reliability of long-term storage at private banks. The FDA these days encourages parents to donate cord blood to a public bank if they aren’t going to store it for their own use.

The American Academy of Pediatrics has cautioned its doctor members to be wary of unsubstantiated claims about the healing power of cord blood.

Dr. Bertram Lubin, an author of the academy’s policy on the issue, said: “I encourage families to use that money that you would use for private banking for a good stroller or car seat.”

—Jeremy Singer-Vine contributed to this article.

Inside the Private Umbilical Cord Blood Banking Business
For the complete article click the following link: 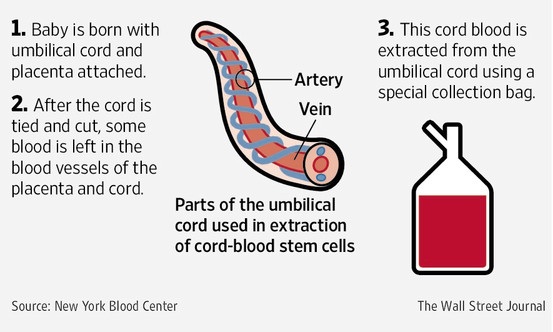 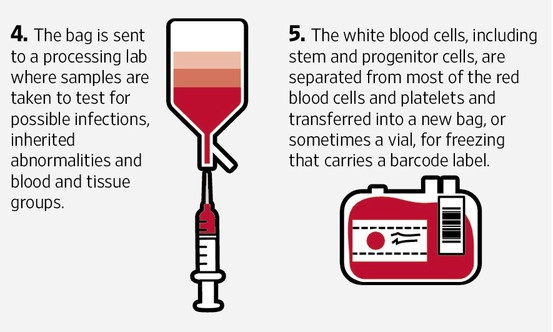 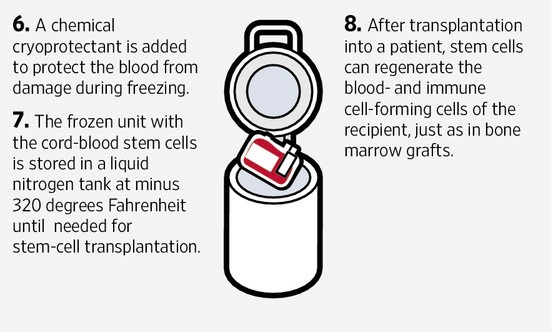 The last three
images are from the article which appeared in the WSJ.