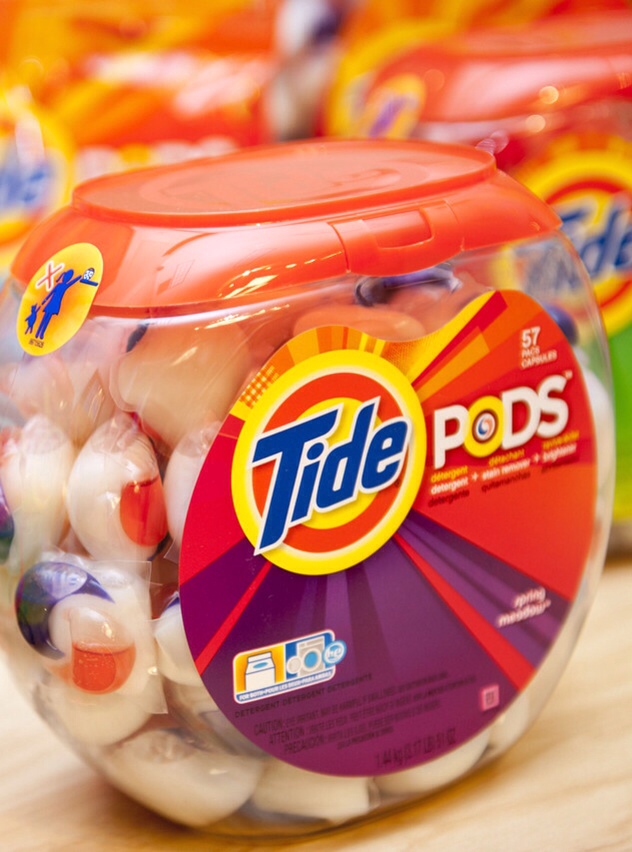 After long ago writing off laundry-detergent products as a risk to children, U.S. poison officials are sounding new alarm bells.

The culprit: single-dose detergent capsules that can have a candy-like appearance. In the past year, they were involved in roughly 10,000 cases of exposure involving young children, according to the American Association of Poison Control Centers, though the capsules are only in an estimated 7% of U.S. households.

Before the capsules became widely available in the U.S., there were typically about 6,500 cases a year of young children accidentally swallowing or coming into contact with liquid or powdered laundry detergent. Serious injuries were rare.

That changed in early 2012, when the new category, dominated by Procter & Gamble Co. PG -0.32% ‘s Tide-branded Pods, began to flood the market. Since then, U.S. poison centers counted more than 14,000 instances of young children eating or otherwise coming into contact with the products from all companies. Thousands of children received medical attention, and some had breathing difficulties that hospitalized them for days.

In August, a 7-month-old Florida boy died after eating a laundry detergent capsule made by Sun Products Corp. Kathryn Corbally, Sun’s director of corporate affairs, said the death was “a tragic accident” and that the company is taking steps to help mitigate any risks to children.

The cases still make up a small percentage of the approximately 1.2 million calls U.S. poison centers get each year involving children five and under. According to poison control officials, there has been only the one known fatality from ingestion of laundry capsules.

The renewed attention on detergents, however, illuminates one of the trickiest problems a company can face: the sudden emergence of safety issues with a key product.

It is especially a snag for giant P&G, which has had few hits with new products in recent years and is under pressure from investors to boost its sales growth.

Tide is one of P&G’s most iconic and profitable brands, with a roughly 40% share of the North America laundry detergent market and accounting for over $3 billion of P&G’s $84 billion in annual sales, according to Euromonitor International. Most of the detergent-capsule accidents involve the company’s Pods, which have a market share of about 70%.

Interviews with poison control officials and the company indicate that the issues with Tide Pods didn’t come entirely out of the blue.

Opaque packaging didn’t begin to hit U.S. store shelves until this past spring, and clear containers were still on some drugstore and supermarket shelves in late summer. They are now largely phased out.

Dawn Hudson, a 34-year-old mother of four in San Antonio, said her youngest child got hold of a Tide capsule last year and bit into it. As the contents shot into the baby’s mouth, soap and bubbles came up through her throat, and she started to gasp for breath. The baby was rushed to the hospital, where doctors suctioned her throat and stomach.

“We didn’t realize how bad it was at first,” said Ms. Hudson, adding her daughter, then 11 months old, was fine the next day. Ms. Hudson still uses Tide Pods but keeps them locked away.

P&G began developing Tide Pods in 2004, designing the white capsules with bright orange and blue swirls and putting them in transparent containers to stand out on store shelves and give people a sense of how many they were buying, said Ms. Keith, the head of P&G’s North American fabric-care business.

But they also bore an unintended resemblance to snack pouches and candy jars, several poison center directors said. The company said there is no evidence that the appearance of Tide Pods makes them more appealing to children than rivals’ laundry capsules.

Before releasing the product, P&G said it tested it in nearly 1,000 U.S. homes without any reports of accidents involving children.

P&G found further confidence of the product’s safety from its experience in France and Britain, where it had sold a simpler version of the capsules for more than a decade before becoming aware of any serious accidents, Ms. Keith said.

The company initially chalked up many of the cases to Italians’ living conditions, said Ms. Keith. Italians typically live in apartments where washing machines are in the bathrooms and detergent is often stored on the floor—within reach of children.

Americans typically do their laundry in separate rooms and keep detergent in cabinets or on counter tops.

P&G began selling Tide Pods across the U.S. and Canada in February 2012, roughly coinciding with the launch of similar products from Henkel AG, which makes Purex detergent, and Sun Products, which makes All detergent. The rival products were a single color, such as blue or white. Most had see-through packaging.

As cases piled up, the American Association of Poison Control Centers sounded a nationwide warning, issuing a new release detailing safety precautions in May 2012.

P&G and others responded with their own educational campaign that summer. P&G appended warnings to its television and online advertisements and said it would add a second latch to the lid of its Tide Pods tubs to make them harder to open. It also placed stickers on the tubs to remind users to keep the products away from children.

The company has modified its containers for Tide Pods several times over the past 18 months and added bigger warning icons and labels as it tries to educate parents about the potential hazards. In August, P&G started adding a third latch to the lids of Tide Pods tubs.

Thus far, the company has notched more than $600 million in sales of its Pods and is planning to roll out laundry capsules under its Gain detergent brand early next year.

A P&G spokesman said past incidents were unfortunate and that the number of reported accidents involving Tide Pods “has been showing a promising steady decline.”

Write to Serena Ng at serena.ng@wsj.com
.